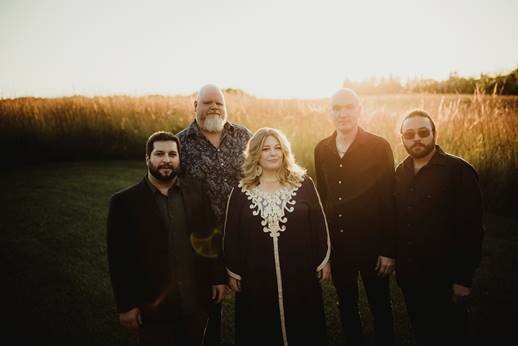 Avey Grouws Band returns to the RiverLoop Amphitheatre to kick off the RiverLoop Rhythms concert series with a performance scheduled for Friday, May 20, 5:30-9:30 pm. Admission is FREE and food and beverages will be available for purchase at the event. RiverLoop Rhythms shows are sponsored by Veridian in partnership with Waterloo Center for the Arts.

The Waterloo Center for the arts is your one-stop location for fun this summer with live music hosted at the RiverLoop Amphitheatre. Get ready to rock and groove by the river at this season’s first RiverLoop Rhythms – a fresh concert series featuring a great line-up of bands and plenty of room for dancing the night away. Enjoy FREE admission and food and beverages for purchase.

In addition to charting on Billboard and Roots Music Report, the Living Blues chart, appearing on numerous end-of-year “best of” lists and getting top honors in the Unsigned Only Songwriting Competition and in the International Songwriting Contest, Avey Grouws Band was also nominated for four Independent Blues Awards in 2021. While the band continues to get recognition for their recorded work, it’s their live performances that keep people coming back.

Learn more about @aveygrouwsband at: https://www.aveygrouwsband.com/
The Waterloo Center for the Arts hosts a fun FREE live summer music series on select Fridays at 5:30PM – 9:30PM from May – August at the RiverLoop Amphitheatre!
Enjoy a wide selection of bands ranging from blues and rock to latin and gospel and MANY MORE!

Waterloo Center for the Arts